Here are my* personal observations
of some of the things that went on at Synod.

These are not official minutes, and can not be guaranteed for their accuracy.

I have concentrated on the things that struck me as interesting or important, and I will have omitted reporting on some issues which you may have picked up.

Would you like to take the photographs?
Then please let the Synod Clerk know! 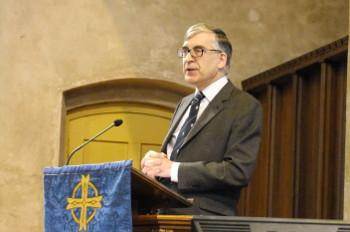 *I begin with comments from Tricia Legge, one of the Synod's Regional Pilots Officers.

Usually when asked to go to Synod we immediately think 'it is a boring meeting and feels like hard work' – but not his time! It was made much more interesting as we had 2 visiting Speakers in the morning session.

The first was John Ellis, Moderator of General Assembly, who spoke on “Celebrating our Ministers”.

John's talk was clear and entertaining with a serious message about Ministers and deployment. As ministers numbers were dwindling we have to use our ministers well and look after them – they are a gift to the church.

He told us that, as we seek to place fewer ministers in our local churches, quite often several churches in an area are simply collected into a pastorate, and the one with the largest membership would have the largest percent of the minister.

But Mr Ellis pointed out it has been found that it is not good to spread minters too thinly – given more than three churches, ministers are rarely effective.

Another approach is ‘Groups’, often with more than one minister looking after a larger number of churches. These can only work if the minsters work with a team of ‘lead elders’ who each look after their own particular church. But this needs further work as it is a radically different way of understanding Ministry: it would require development of training for the ‘lead’ Elders and the ministers, and decisions about who can be accepted as ‘lead’ elders, who the line manager is and so on.

Perhaps instead of thinking of membership numbers as the only criteria we should prioritise according to the work that needs to be done (as we already do in a few ‘special category’ ministry posts).

So a minister could be placed:

John's talk ended with telling us all that we should pray for the church and work towards supporting new patterns of ministry in the years ahead. He reminded us that ‘The Minister’ is a gift of the whole church and not the property of one church therefore we should celebrate and pray for all our ministers.

The second guest speaker was Stephen Tomkins, Editor of Reform. He gave us a fascinating talk about the evolution of our denominational magazine, and explained how they are moving towards making it more of a resource for its readers – church members, worship leaders, and elders.  Churches are being encouraged to have a local church distributor to promote the Magazine in each congregation.

Reform is available as a paper magazine on subscription, or online. New members can receive a number of copies free.

If you want to see one, just ask your minister or church secretary – or call into the Synod Office and pick up a complementary copy it is actually a good read! 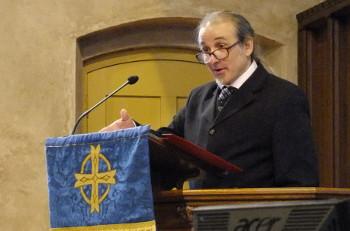 The afternoon session was livened up by a discussion of the following  resolution from Langley and Eastwood URCs:

The East Midlands Synod resolves that the General Assembly Resolution 4A in the Marriage of Same Sex Couples be “not proceeded with”.

Resolution 4A is the one that states that the propper place in our denomination for this to be decided is at each local Church Meeting.   It was defeated on a vote with huge majority. It would need four Synods to each pass such a resolution for General Assembly to not proceed with Resolution 4A.

The afternoon session was lightened by most Conveners NOT speaking to their written report unless there was new information to be added. This left more time for questions and discussion around resolutions.

Revd David Downing, Convenor of Ministries Group announced that the Good Practice 4 Section on safeguarding for Adults at risk is now on the URC web-site.

He then presented a resolution that as from 2016, we introduce the role of Synod Recognised Lay Preacher, in accordance with process and detail outlined in the [synod] paper.

The synod paper described in some detail the process that would be followed, designed to reflect the importance of such a recognition.

The church meeting at which the person is a member recommends the person, who then will have two services assessed by a member of Ministries Committee. Details will no doubt appear on this Website when they have been finalised. After debate the resolution was agreed by consensus.

Helen Lidgett, Synod Clerk, presented her report
including a resolution accepting
District council's recommendation to Synod
to dispose of the site of the Former Dronfield Hill Top URC.

And Synod unanimously agreed to the resolution:
"Synod recommends Mr Graham Ghaleb MA,
to be nominated as Ministerial Moderator
of General Assembly 2018 – 20. "

Graham is a well known and respected CRCW. 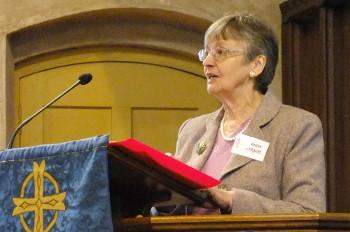 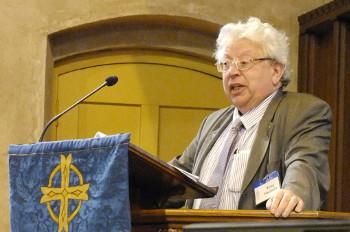 Under Finance and Property Tony Hudson presented this resolution.

Synod approves that Vacancy Relief be terminated
in the East Midlands,
with effect from 31 December 2016.

Understandably this drew quite a response, but it does bring us in line with many if not most other Synods, and is more in keeping with the nature of  M&M which is not 'buying a slice of a Minister' but resourcing the whole church.

It was passed by consensus.

Irene Wren delivered her final report from the Search Group, detailing all the posts at Synod level and pointing out any vacancies. 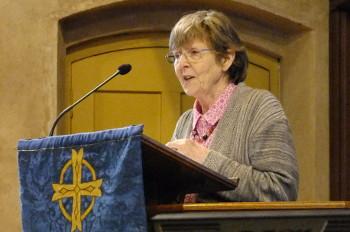 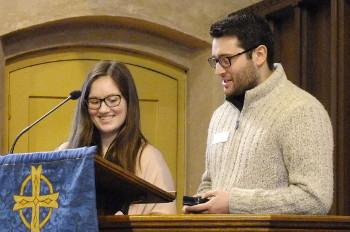 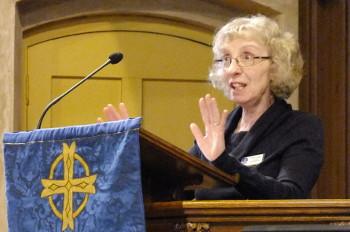 Mr Michael Bullock and Miss Georgina Neale presented a report on Youth Assembly where they represented The Synod, and Mrs Tricia Legge one of the Synod's Regional Pilots Officers promoted Pilots and talked about the Pilots Day at Belton House near Grantham arranged for Sat 14 May - and it is not just for Pilots.